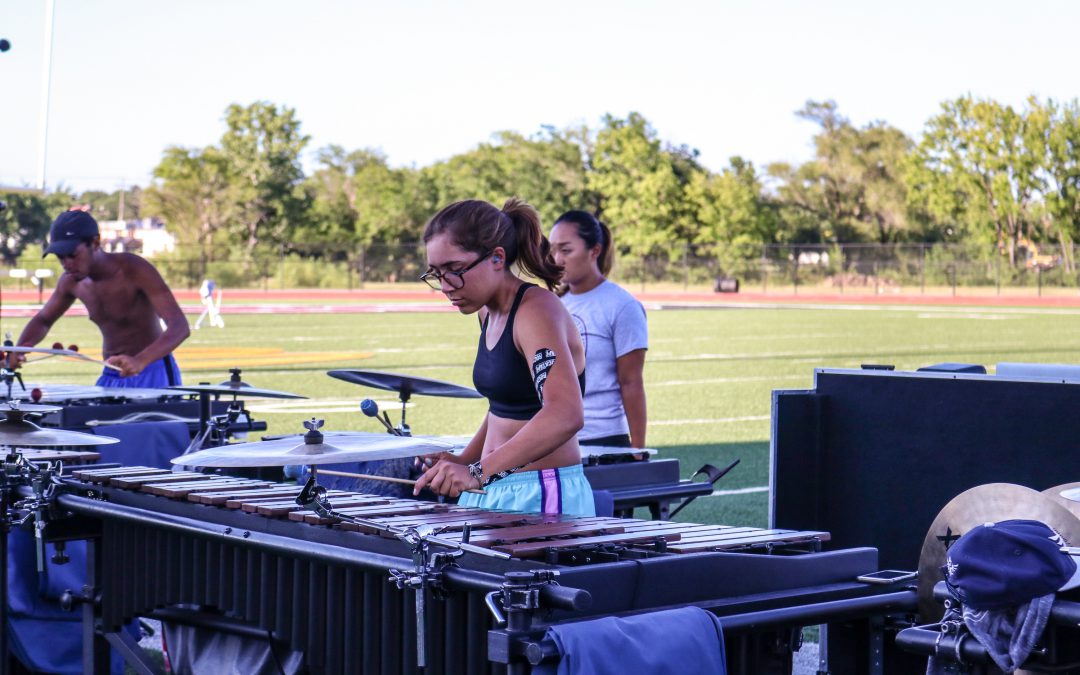 Athletes spend hours on the practice field day in, day out, to master their sport so that they can perform at the top level. The work musicians put in is much less glamorized and is often forgotten. When we began working with the Pacific Crest Drum and Bugle Corps we had to find out more about what goes into putting on a great show. This talented group of youngsters compete at an elite level, which means they’re spending hours a day training in tough conditions so that they are at the top of their game when competition time arrives. Whilst hard work and determination are key to their success, a grueling schedule can often lead to repetitive stress injuries.

We caught up with team physician Cami McCallum, RN, ATC to learn more about the work outside of the spotlight and how she uses RockTape to keep her musicians going stronger, longer. Here’s what she said:

The special part about drum corps is that these musicians perform and train like elite athletes for several hours per day. They are essentially in the major leagues of the music world – yet nobody seems to know much about them. Kinesiology taping is the newest secret weapon in the drum corps world. It has been my absolute privilege to bring in RockTape, specifically because the conditions the members rehearse in are not at all ideal for traditional tape. They work so hard, sweat so much, and are out in such humid, muggy or hot conditions that traditional tapes fall right off of them within seconds or hours if we are lucky.

After using RockTape in a traditional athletic setting, I taped the drum corps kids with RockTape and it actually held; I didn’t have to reapply the tapes multiple times in a day! I saw incredible success with its mitigation of discomfort*, and people were able to return to activity so much faster with the tape on – for even a day or two. I also saw good results for swelling and edema control which is always helpful in these circumstances where uniforms are fitted, tight and offer minimal flexibility.

Honestly though, the most impressive results I saw were with nerve activation. I worked with a patient who had significant neurological impairments as far as strength and sensation are concerned. By laying the RockTape on her in those areas that were previously hyperanalgesic, or had paresthesias or had markedly decreased muscle activation, she could actually walk and move and perform in a functional manner. Her discomfort* had decreased significantly, her numbness had decreased so she could actually feel tactile feedback again, and her muscles were activated in such a way that she could move without needing so much help anymore. It was truly impressive to see!

I am even more of a committed fan and believer in RockTape than I was before this. Thank you so much RockTape for providing such a durable, effective and useful product for me and the health team working with the Drum Corps!

Here are what the athletes themselves had to say:

“RockTape isn’t a crutch, it’s an aide to success.”

“RockTape lasted through full days of sweating and moving around. Also, it really helped with relieving the discomfort* in my foot.”

“After having little success with other types of kinesiology tape, RockTape has been [a] game changer. I can really feel the difference. RockTape helps me perform at 100% whether I am at the gym or on the field. It’s extra strong adhesive lets me focus on what I need to get done without the worry of it peeling off. I love how I can apply the tape and after a couple days still feel the same effects as the first day.”

#NewProfilePic I love rock tape 💙 it's how my body gets through the day 😂! @Rocktape pic.twitter.com/bOXDarJBTP

@Awkward_Legend: I love RockTape 💙 it’s how my body gets through the day!