Tissue damage or residual edema and fluid from blocked shots, whether intentional or not, are something I deal with on an almost daily basis with my hockey players. These days, the players are faster and stronger than ever. This combined with the innovative technology of the composite sticks, pucks are easily traveling at speeds of over 100km an hour. When these shots strike tissue, especially when they conveniently miss a large amount of padding, the results can be extremely painful for the player. I have found Rocktape to be an excellent tool and addition to my practice in the recovery process of these injuries.

First and foremost, just like any other wound, you have to stop the bleeding. The most effective way to do this is by approximating the tissue with a compression pad and compression wrap for at least 48-72 hrs depending on the severity of the injury. Heat is an excellent way of estimating whether the bleeding has stopped. When the impact site has returned to normal temperature, at least consistent with the surrounding tissues then bleeding has more than likely subsisted. 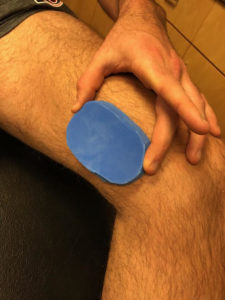 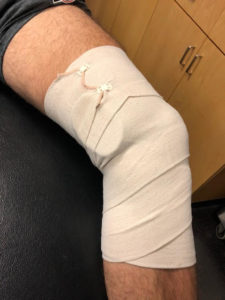 How to treat residual edema and fluid

Now you have to deal with the residual edema and fluid. Rocktape’s basketweave technique is an excellent tool for edema control. By utilizing the lymphatic taping technique along with graded exercise you can assist the body in absorbing the edema quickly and effectively.
Need tape get it HERE 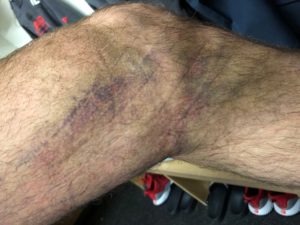