Climbing, whether indoors or outdoors, is muscle memory at its finest – if you don’t use it, you lose it. Thanks to a series of very unfortunate events, my early days of attempting 5.10s quickly turned into years of atrophy as my harness and shoes gathered dust.

After a 5-year hiatus, I finally found myself back at my local climbing gym, all tied in and ready for action. I looked at the slabby 5.5, shoved my ego aside, and began my ascent. I clumsily made it about ⅓ of the way up the 50-foot wall before an all-too-familiar unfamiliarity settled in. My heart quickened in its aerobically deconditioned state as my mind took over my body:”” 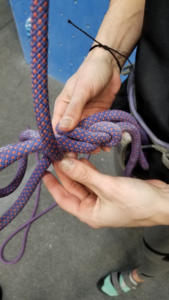 “My harness is too loose.”

“I’m not standing on my feet.”

“Where is my next hold?”

I signaled for my belayer to take in the slack as I sat back and attempted to rest and regroup, which only made things worse. The stoppage of movement made it entirely too difficult to start moving again. And so, begrudgingly, I asked to be lowered. My mind had taken over… and won.

The cycle repeated itself during every route I attempted over the next 3 weeks. Climb, freak out, give up. The mental hurdle was as annoying as it was persistent. Until that fateful Saturday when I found myself on another slabby 5.6 – well within my technical ability, especially for a warm-up. Without fail, my mind began playing its symphony of doubt about halfway up the wall. Frozen, I was about to throw in the towel yet again when I heard the voices of three young girls echo throughout the cave behind me:

“This is high enough!”

“We aren’t letting you down until you finish!”

It was as if their dialogue was meant especially for me. Something inside of me clicked.  I realized, right then and there, that the only one preventing me from sending this route was me. Slowly and methodically, I started to move – and I didn’t stop until I reached the top. I had the technical ability. I had the intuition. But I was lacking the confidence. I finished the 5.6 with ease, dumbfounded that it took so much time and mental effort in the first place. In a moment of self-compassion, I realized that sometimes the best thing I can do is stop thinking and JUST MOVE.

Technical challenges aside, I haven’t met a route that I haven’t finished since that fateful day. I’ve surprised myself in more ways than one by simply believing that yes, I can and giving myself the grace to move forward.I still need the occasional “take” to sit back and breathe (as all climbers do) but my rest periods are much shorter and more focused. Paradoxically, I have found that moving consistently is more effective and less taxing on the body than not moving. Perhaps you find yourself stuck on your own proverbial rock wall. Perhaps your wall is injury, a certification exam, or that three-pointer you just can’t seem to sink. You may find yourself trapped in your own head and filled with self-doubt, fear, and insecurity. Trying seems futile as you consistently find yourself with plenty of options yet unable to progress forward. I’m here to tell you thatyou, too, can do this. The journey may seem long, difficult, and intimidating. Indeed, it very well may be all those things. But, as I have learned in more ways than one, we are all much stronger and more resilient than for which we give ourselves credit.

You’re closer to the top than you think you are, I promise. Just keep moving!